We were born into a world of electric illumination. Incandescent lights, fluorescent lights, halogen, xenon, LEDs. It glows from lamps and televisions, twinkles from nightlights, puts on a show when you rush past it in tunnels, speckles a cityscape at night. We take it for granted, generally speaking. It’s tough to imagine a world in which electric light does not exist. But, when you think about it, electric lamps have only been the norm for a tiny,TINY percentage of the history of human life.

So, I’m starting a blog series on the history of the light bulb to give us some perspective on how the light bulbs that glow all around us have come into being. Who were the geniuses behind the inventions that led us to today’s energy-efficient LED light bulbs? What struggles did they encounter as they sought to further technological progress?

Let’s go in order. Today, it’s all about the carbon arc lamp, recognized to be the first electric lamp. If you’ve never heard of it, that’s why I want to talk about it. The carbon arc lamp was invented in the early 19th c. and predates the incandescent lamp. It’s a too-little recognized game changer in the history of lighting.

If you have a minute and want some fantastic insight into the carbon arc lamp, the first electric light and THE sole lighter of commercial spaces for 100 years, then watch the short video above from Edison Tech. If you’re in a hurry, here are the bullet points for the carbon arc lamp in the history of the light bulb. 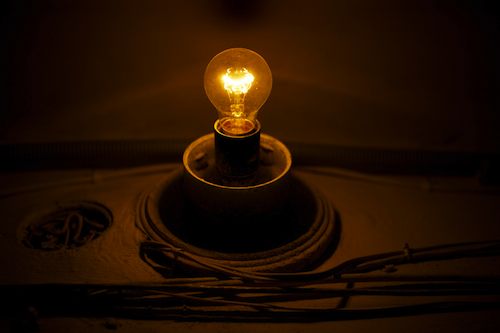